Wednesday morning brought us to the La Esperanza Cooperative School. This was a textbook, re-inauguration. This means they have been in the program for at least five years and have accumulated the funds from their book fees to replace their old books with new editions. This is always an important occasion for the students, teachers and especially the parents. For it is through the efforts of the parents that the money is collected to ensure they have new textbooks. This is how this program is self-sustaining.

Past President of the North Raleigh Rotary Club, Terry Hutchens was the speaker for the morning and gave an impassioned speech about the need for the students and parents to continue to embrace and utilize these tools to better themselves and their communities. This is what the project is all about…students bettering themselves to serve and improve their local communities. Each generation of student is a role model for those who would follow them.

Terry was the speaker because he and Jeff Taylor, a past member of the North Raleigh Rotary Club, sponsored the computer center at this school several years ago. After the presentation, we did visit the computer lab, but I was unable to take photos as my batteries died again on me. 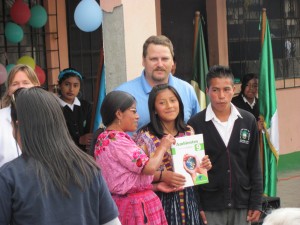 Presentation of the new textbooks

As you will note, I am being photographed with two students and a parent. With the re-inaugurations, a Rotarian presents the new textbook to the parent and the parent presents it to the student. This day happens only because the parents at the school pay the fees to ensure the money is available to purchase new textbooks. It is still difficult at times to get the message across to the locals that these books are not because of Rotary, but because of them.

It truly gives them a sense of accomplishment as they are helping themselves, not being helped. Once they begin to grasp this concept, it will give them even more pride in their school and community.

After visiting the Taylor-Hutchens Computer Center, a few of us joined the basketball game already in progress. The school has a girls basketball team and wanted to have a game with us. I must admit, I am out-of-shape and the high altitude did not help me in the least.

While I was playing basketball, Terry took a tour of the addition the school hopes to get done soon. They are looking for ways to pay for the improvements which will be around Q200,000 to complete. The principal is very passionate about his school and education. He is a huge fan of CoEd and the GLP.  As he mentioned in his presentation, he was initially a little apprehensive about the initial textbook project, but after seeing the results from the students, he has become fully committed to this project. 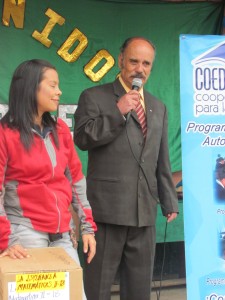 In the afternoon, we visited Colegio Fuente de Sabiduria school for a textbook inauguration. This was once again, an amazing experience. The local cooperative has become very involved of late with establishing a quality education for their community. I hate that I did not have the use of my camera as they, together, have done an amazing job to build a large, multi-storied structure with an indoor soccer field.

The cooperative has determined the education is important and are helping this school. They wanted the textbook program and are interested in getting a computer lab as soon as they can. 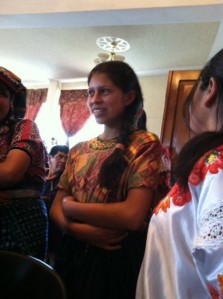 The students were excited to have us here, but more so, excited about the new textbooks. After leaving the school, Terry said to the group that he would like to be at this school the next day when the students received their textbooks. He thought that would be an amazing experience. Later in the week, Howard Lobb, the director for the computer centers for CoEd, mentioned that he would love to be in the homes of these students to see how they interact with their parents with their new textbooks. To see the excitement would be amazing.

Two Young Ladies at this school

It was at this school that I realized how popular I was among the young ladies. These two adorable young ladies approached me and wanted to take my photo. Unfortunately, they could not locate their camera in the crowd, so I got a photo of them. Many of these Indigenous Mayans have never seen a ‘Gringo” and they get excited when they do see one.

When it comes to this school, I expect to hear great things from it. This school and community has finally realized that education is important to the future of their children and communities and are doing everything in their power to ensure their children a brighter future.

This entry was posted in Guatemala Literacy Project. Bookmark the permalink.

2 responses to “Wednesday in Guatemala”