I apologize for being behind with my blogging, but three days this week, my Internet connection was very spotty and it was difficult to blog on those days as I would loose connection at the drop of the hat.

The School at Chiquilaja' posted a message to Rotary and CoEd.

At this school, all of the participants were escorted into the hall by a local student. A table was set up in the front for some of the dignitaries of the group. Also in attendance was Brenda, the young lady who was the sponsor for the GLP in 2010 during the national contest for non-profits in Guatemala. CoEd came in 3rd place, which was where they wanted as the other two groups needed the money more than they did that year. 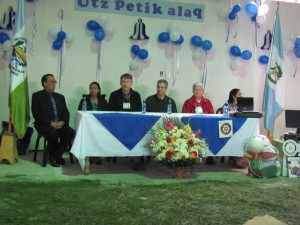 Panel of the Dignitaries for the Re-dedication Ceremony

This school has both the textbook and computer center and has been doing an amazing job of educating their students. Brenda is not in Secondary (high school). She wants to attend college and last I knew, she wanted to be a doctor. 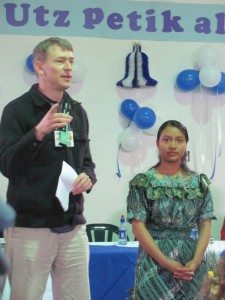 The once shy and timid Brenda has developed into a confident young lady. She wanted to say a few words of thanks and encouragement to both the Rotarians and her former classmates. She is a breath of fresh air with her perspective on life. Brenda is the product of a single mother with several siblings. Her father left the family years ago and her mother has insisted that her children get an education to help raise them out of poverty. I can only imagine that her future will be bright. 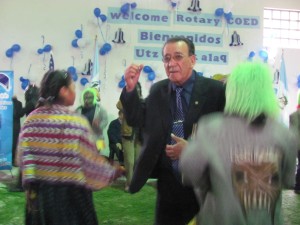 Principal of the school enjoying himself

After the formal ceremony, the students performed a couple of dances for us. During the final performance, they encouraged us to join them in the dance. The principal of the school got his “groove” on with the students. It is always a very festive occasion for them to have us at their school. We felt very honored to be there. 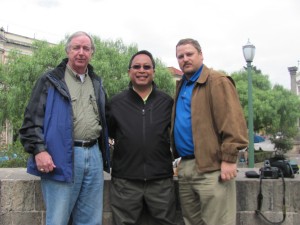 After the first school for the day, we had some free time in Xela to walk around and have lunch on our own. The Three Amigos, Terry, Bang and myself, stopped for a moment to be photographed before taking Gabby to lunch. We picked the same restaurant that Boyd and I visited the previous year. This restaurant was good, but a little slow. However, it gave us a bird’s eye view of the main square in Xela and several other members of our group followed us to this 2nd floor balcony restaurant.

After lunch, we gathered on the buses to travel to the Tacajalve’ Cooperative School for a computer center inauguration. This makes 51 computer centers in Guatemalan schools since 2001.The students are thirsty for knowledge and computers are the future for Guatemala and their students. Computer skills will make them better qualified to get a good paying job when they graduate. Nearly half of all good paying jobs in Guatemala require computer skills.

After the ceremony, I had the opportunity to visit with this young man as he demonstrated what he had learned since school began for them less than 3 weeks prior. He demonstrated both Excel and Powerpoint. Skills that I do not completely have after many years with a computer. He was very impressive and the teacher training is impressive. Last year, one of the CoEd trained computer teachers traveled to Washington, D.C. to compete in a Microsoft competition for teachers. This same teacher won at both the local, national and regional levels before being invited to compete at the international level. He did not win, but was very competitive.

Once again, the schools that we visited this day were unique experiences. It seems the more schools I visit, the more impressed I become with CoEd, the GLP and the students. They are striving to improve themselves and with the help of Rotarians and others, they have a great opportunity to vastly improve their nation.

This entry was posted in Guatemala Literacy Project. Bookmark the permalink.